Skip to content
Conference “The Fantastic in a Transmedia Era”
Conference

Conference “The Fantastic in a Transmedia Era”

From November 24 to 25, I attended the international conference “The Fantastic in a Transmedia Era. New Theories, Texts, Contexts” in Odense, DK. Click here to read a short report.

Given the enormous popularity of fantasy in contemporary media culture, it may come as a surprise that academic research on the fantastic is still struggling to gain general acceptance within the various disciplines involved (like, for example, literature, film and television studies). The upside, however, is that when fantasy scholars meet, they instantly switch to a sort of ‘community-of-fate mode,’ which is collegial, passionate, and highly engaging. I witnessed this at the “Winter is Coming” conference earlier this year – and most recently at the international conference “The Fantastic in a Transmedia Era. New Theories, Texts, Contexts,” which took place from November 24 to 25, 2015 in Odense at the University of Southern Denmark.

The two-day conference addressed a wide range of topics – from theorizing the fantastic to questions of genre, adaptation, and audience engagement – and put a special emphasis on aspects of transmediality and world-building. Danish film scholar Rikke Schubart had invited no less than six distinguished keynote speakers from all over the world (seriously, even from Hawai’i!), which were complemented by five times as many paper presentations. Myself, I was happy to be part of a roundtable seminar discussing gender in the transmedial world of Game of Thrones. 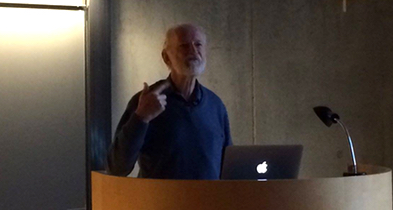 With both ‘the fantastic’ and ‘transmedia’ being somewhat fuzzy terms, it is not easy to identify common threads among the presentations – even though some franchises (like George R. R. Martin’s A Song of Ice and Fire or Peter Jackson’s The Hobbit) featured prominently in more than one discussion. One especially prevalent theme, however, was the creation of (fantastic) franchise worlds and the various forms of audience engagement they allow for. Martin Barker, for example, presented preliminary findings from the World Hobbit Project, a worldwide survey on people’s views on Jackson’s film trilogy. Since the massive corpus of responses (36,109 responses in total) is still waiting to be analyzed in detail, Barker’s lecture focused on how responses to The Hobbit relate to broader orientations to ‘fantasy’ and its potential for experiencing worlds different from (or similar to) audiences’ social and political realities. Representing the Finnish section of the project, Urpo Kovala and Irma Hirsjärvi addressed fandom-related questions by comparing responses to the treatment of characters and plot in book and film, while Lars Schmeink presented an insightful examination of the German responses regarding the evaluation of The Hobbit as a children’s film. These findings were not only complemented by the Russion section of the World Hobbit Project but also by another transnational study, the New Zealand-based Hobbit Audience Project led by Carolyn Michelle, which likewise tackles questions of audience segmentation related to competing fandoms, generic expectations, aesthetic tastes, and political values.

With so many hobbits around, Angela Ndalianis’ keynote lecture on ‘Superheroes, the Fantastic and the Creation of Franchise Worlds’ made for a nice change by focusing on fan involvement via alternate reality games (ARGs). Drawing on the example of the massive The Dark Knight viral marketing campaign, Ndalianis lucidly discussed how studios compete in the creation of franchise worlds and of strong affective relationships between these worlds and their audiences. A very different – yet highly interesting – perspective on fantasy fandom was offered by Minna Siikilä: in her paper she discussed how the notions of ‘creativity’ and ‘originality’ feature prominently in controversies around fantasy authors like Christopher Paolini – thus proving that the ‘myth of the inventive genius’ is alive and kicking (in fan discourse, at least).

Another theme of the conference was, of course, the transmediality of fantastic franchises and theoretical issues of their adaptation in different media. In a keynote lecture that was both theoretically sound and analytically sharp, Anne Gjelsvik discussed the notion of medium-specificity from a mildly phenomenological perspective as being informed by historical, cultural and political contexts (and not just the medium’s affordances and constraints). Comparing scenes of sex and violence from George R. R. Martin’s A Song of Ice and Fire novels and HBO’s Game of Thrones, Gjelsvik argued that the notion of medium-specificity should reflect that there “is something novels can tell what film and TV can’t show” because of their differences in ‘experiential quality.’ Cristina Bacchilega, for her part, discussed ‘activist’ fairy-tale adaptations as a means to challenge hegemonic uses of the fairy-tale genre in contemporary media culture and commonly accepted interpretations of their fairy-tale intertexts. By raising the question what our responsibilities as scholars of the fantastic might be in a globalized convergence culture that thrives on social inequality, Bacchilega rightly challenged the notion of fantasy research as something peculiar and (allegedly) apolitical.

Other papers focused on world-building and seriality in the Mass Effect universe (Michael Fuchs), transmedial production and narrative strategies in Battlestar Galactica (Aino-Kaisa Koistinen, Raine Koskimaa, Tanja Välisalo), issues of adapting characters in Game of Thrones (Anna-Leena Harinen), transmedial ‘toyfriends’ (Katriina Heljakka), and many more. While most of these papers offered interesting analyses in their own right, the lack of shared theoretical points of reference was still striking. While Linda Hutcheon[1], Henry Jenkins[2], and Mark J. P. Wolf[3] were mentioned every now and then, one still got the impression that ‘theorizing the fantastic’ from a transmedia/adaptation perspective can mean almost anything in terms of theories and methods. But although this multiplicity of approaches can at times seem obstructive, in the above cases it still furthered highly engaging discussions across disciplines.

A third and final theme revolved around specific fantasy ‘texts’ and critical readings of their representational and political dimensions. Conference host Rikke Schubart, for example, elaborated on ‘fantastic emotions’ in film and television and the way the depiction of fantastic occurrences might lead to viewers being moved, getting (musical) chills and experiencing what she called a ‘wow’ moment. In another paper presentation, Daniel Baker presented an insightful and critical reading of the ‘chosen one’ trope in fantasy and how the works of Brandon Sanderson and China Miéville distort and subvert this highly ideological (and political) rhetoric.

Even more political – and, frankly, my personal conference highlight – was the keynote lecture by British media scholar Stéphanie Genz. Herself an expert in contemporary gender politics and theory, postfeminism, and popular culture, Genz offered a spot-on analysis of Game of Thrones as a social commentary grounded in sexual/sexist, economic, cultural, and political conditions. With Henry Giroux she identified the early 21st century’s neoliberal regime of economic Darwinism as a background before which Game of Thrones presents sex as a means of empowerment and neoliberal agency. She argued that the series exhibits a form of sexist liberalism that can easily blend into ‘liberal sexism’ that is unsentimental in its portrayal of violence, sexual abuse, and torture.[4] With her lecture Genz also laid the ground for the subsequent roundtable seminar on gender in Game of Thrones, which I shared with Anna Gjelsvik, Maria Larsson, Rikke Schubart, Elizabeth Beaton and Stéphanie Genz. Charmingly hosted by Angela Ndalianis, we indulged in some entertaining discussion of such illustrious topics like the Death of Feminism (DoF), the politics of Game of Thrones, new female narratives, as well as sexploitation and violence.

Concluding with a keynote lecture by Katherine A. Fowkes, author of the now seminal The Fantasy Film [5], “The Fantastic in a Transmedia Era” was a highly stimulating and well-organized event that will hopefully see some sort of follow-up in the future.

Thanks to Rikke and her team for all their work and hospitality!

[4] See Genz, Stéphanie (2016, in prep.). “‘I’m Not Going to Fight Them, I’m Going To Fuck Them’: Sexist Liberalism and Gender (A)Politics in Game of Thrones“. In: Rikke Schubart and Anne Gjelsvik (eds.). Women of Ice and Fire. Gender, Game of Thrones, and Multiple Media Engagements. New York, NY: Bloomsbury.

Photos: © Conference “The Fantastic in a Transmedia Era”